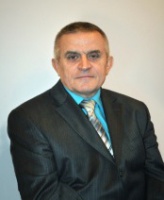 Bomba Andrii Yaroslavovych is Full Professor, Doctor of Sciences (Technics), Ph.D. (Physics & Mathematics), Professor of Department of Computer Sciences and Applied Mathematics of National University of Water Management and Environmental Engineering. His name is well known to experts in the field of technical and physical-mathematical sciences in Ukraine and abroad.

A. Bomba finished the study at Holoshynetska start school and Novoseletska middle school (1956-66 yy.) in Ternopil Region and entered Lviv State University after Ivan Franko to the Faculty of Mechanics and Mathematics. He obtained the Specialist Diploma (Speciality: Matematician) in 1972. He studied at postgraduate school at Institute of Mathematics of the Academy of Sciences of Ukraine (Kyiv, 1978-1981 yy.) and at Doctoral School at the V.M. Glushkov Institute of Cybernetics of National Academy of Sciences of Ukraine (Kyiv, 2000-2003 yy.). He studied at training courses at the Faculty of Cybernetics of Taras Shevchenko Kiev State University, at the department of mathematical problems in mechanics of Institute of Problems in Mechanics of the Academy of Sciences of USSR in Moscow and at National University “Lviv Politechnic”.

His scientific achievements are approved by PhD in Physics&Mathematics and Doctor of Sciences in Technics in speciality “Mathematical Modelling and Numerical Methods”. He held the positions of assistant, teacher, senior lecturer, associate professor, later head of the Department of Informatics and Applied Mathematics, professor of RSHU, and also was a teacher. While working on the development of various scientific projects, he also worked as an engineer, junior and senior research associate, managed budgetary topics. His research interests are systematic mathematical modeling of nonlinear perturbations of processes type "filtration-convection-diffusion" with aftereffect at incomplete data, spatial analogues of boundary value problems on quasiconformal mappings and problems of modeling nonlinear processes in porous media, mathematical modeling of nonlinear processes of multicomponent and multiphase filtration in systems such as reservoir-fluid on conditions of control and optimization, and to intensify the influx of the formation fluids using hydraulic fracturing and thermal methods (particularly in the shale and bituminous layers), modeling nonlinear perturbations of processes of mass transfer in different-porous (nanoporous) mediums on conditions of control, optimization and identification of parameters, modeling of nonlinear processes of filtering fluids from multicomponent contaminations with considering the reverse effect and diffusion-masstransfer perturbations, improving the efficiency of consistent and progressing compressions of color images without loss, forecasting the propagation of soliton-type separated waves; construction of fundamentally new diffusion-like models of information process of knowledge potential propagation, problems of identification in electro-impedance tomography, modeling of explosive processes.

A. Bomba submitted the idea and contributed to the introduction of specialties in Applied Mathematics at the Universities of Rivne. He also makes much effort for the organization of cultural and scientific life. Professor is founder and chief editor of collections of scientific papers “Volyn Mathematical Bulletin. Applied Mathematics Series”. He is member of the editorial boards of scientific papers collections and specialized scientific councils on thesis defense; systematically reviewed articles, manuals, textbooks, monographs, candidate and doctoral theses.

Direction of the scientific school: Mathematical modeling and computational methods. Problems. Development of numerical methods of complex analysis and perturbation theory of modeling of nonlinear processes with aftereffect under conditions of control, identification and optimization of parameters.

He was in charge of managing state and state budget topics: Mathematical modeling of nonlinear perturbations of eco-energy systems (State registration number 0100U004897); Numerical-asymptotic methods in ecological problems (State Fund for Basic Research of SCST of Ukraine, project № 1/778 dated 4.05.92 and № 11.3 / 91); Perform mathematical modeling of the diffusion process in the sample-cell system (Yaroslavl Departments of the Kama Institute of Deep and Ultra-Deep Well Research); Systematic mathematical modeling of nonlinearly perturbed "filtration-convection-diffusion" processes with the effect of incomplete data (state registration number 0109U001065); Improving lossless image compression efficiency in modern graphic formats (state registration number 0110U004001); Development of methods and graphic format of progressive lossless compression of color images; Spatial analogues of boundary value problems for quasiconformal mappings and problems of modeling nonlinear processes in porous media ”(State Registration No. 0112U001014); «Development of numerical methods of complex analysis and perturbation theory of modeling of nonlinear processes with aftereffect under conditions of control, identification and optimization of parameters» (0116U000711). He participated in many other topics, in particular: Mathematical models of nonlinear stationary and non-stationary filtration and hydraulic processes, problems of interconnection and consideration of local inhomogeneities (No. I-34 on the basis of the decision of the Expert commission of NUHPP of January 10, 1995, Protocol No. 4 to the order of the rector of January 6, 1995 under No. 6); Physical and mathematical modeling of filtration-deformation processes in soil dams taking into account the mutual influence of gradients of pressure and characteristics of the environment (No. 2-62, NUPGP, 17.05.03); Development and justification of energy efficient constructions of heat reclamation systems for heating of the protected soil by low-temperature waters (for example, thermal waste of industry) (state registration number 0110U00820); Development of theoretical bases for utilization of low potential heat of waste water of industrial facilities in agriculture (№ I-27 - NUELP; RK №0107U002002032 - Ukr STI); Research and theoretical-experimental substantiation of the basic parameters of the process of magnetic purification of the heat-power plant environments (state registration number 0112U001591, NUPGP, 2012-2013); Research and improvement of basic parameters of magnetic deposition apparatus of ferro-containing products of corrosion of thermal power equipment (state registration number 0114 U 001615).